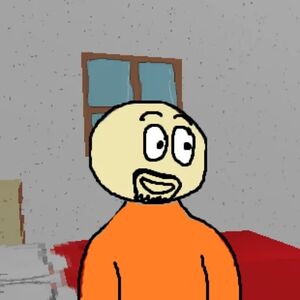 Mr. Anderson is one of Livethink's main scientists. He was born in Mehrgan on 20 June 1979 and graduated from Esyversity. He is also one of 6 co-founders of Livethink corporation and was the leader of scientists there until the Bit Jail incident.

In 13 October 2005, Mr. Anderson was kidnapped by REDACTED and jailed in his house. A few days later, Mehrgan police received a call from REDACTED's apartment telling them about a terrified scream and started investigating the area. Reports say that the police found Mr. Anderson in the hallway, laying on the floor with a huge cut on his stomach and barely breathing.

There was no trail of REDACTED, everything was exceptionally cleaned and his house was empty. Police didn't find anything related to the case except for an empty bottle of Gelofen 500 which had Mr. Anderson's fingerprint on it and proved his claims. This case is mostly referred as "Bit Jail" incident because of how pixelated Mr. Anderson described REDACTED's house when he was jailed there.

After receiving regular treatment at Mehrgan hospital because of Bit Jail incident and losing his hope, Mr. Anderson was offered to be test subject of Prof. Amini's newest invention, Mendy. He accepted the offer and prototype version of Mendy was tested on his wound.

Despite its early stage of development, Mendy surprisingly stitched Mr. Anderson's wound at contact in just a few hours. Although it had some side-effects, but Mendy saved Mr. Anderson's life and he currently works as a regular scientist in Livethink's technology section.